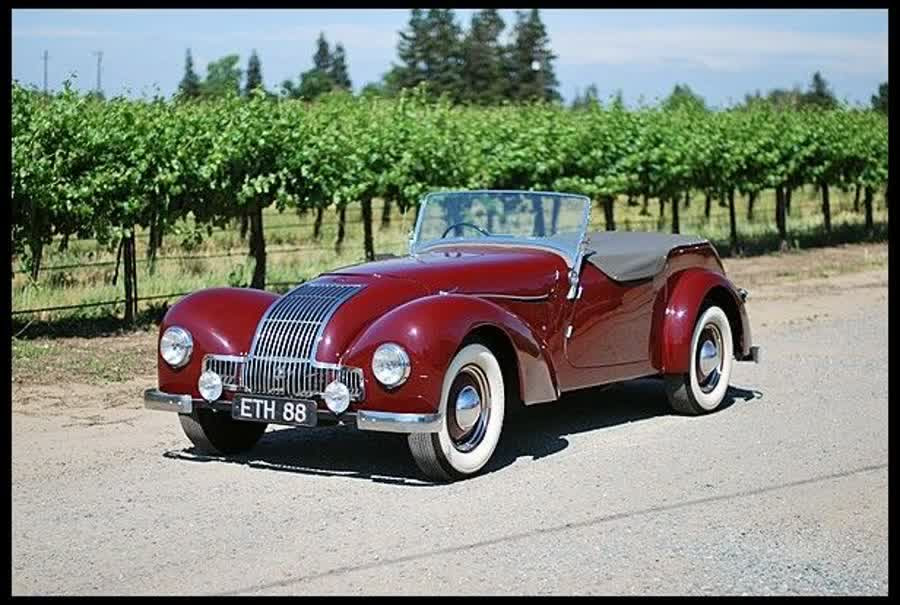 1948 Allard L type in very nice condition. Using a crashed Ford V8 coupé on to which he had grafted the body from a Grand Prix Bugatti, racing driver Sydney Allard constructed one of the most unlikely of all pre-war trials specials. However, the Allard Special’s lightweight construction and relatively powerful American V8 engine, although not the first such combination, demonstrated the formula’s potential and provided the inspiration for future imitators, including Carroll Shelby who acknowledged Allard’s influence on the Cobra. After WW2, Allard progressed from special-builder to motor manufacturer, though the latter activity was really little more than a means of financing the company’s competition programme. Post-war Allards combined the same virtues of light weight, independent front suspension and an abundance of American V8 power, which had been features of that first trials special of the mid-1930s. These favourable characteristics enabled Allard to establish a formidable competition record in the immediate post-war years, Sydney himself finishing 3rd at Le Mans in a J2 two-seater and winning the Monte Carlo Rally outright in a P2 saloon. Introduced in 1946, the L-type employed Allard’s trademark independently suspended ‘split’ front axle and transverse-leaf rear end in a chassis 6” longer than that of the contemporary K-type, the extra length being used to accommodate two rear passenger seats. Like the vast majority of production Allards, the L-type used Ford/Mercury components, these being readily obtainable from Ford in the UK, the choice of engines being the 3,622cc Ford V8 or modified 4,375cc Mercury. A mere 191 examples were produced between 1946 and 1950, only 10 of which are currently known to the UK Allard Register. We were just fortunate enough to purchase this rare and very cool looking car and are offering her back to the market at only $67,500 / obo / trade up or down..

On this episode of My Classic Car, Dennis heads to Orlando, FL to check out some cool cars at the Festival of Speed. Plus, we'll talk modern tunes for classics in the Autogeek Garage.

Victory Cars on location at a car show in Orlando Florida. Check out this COOL video with Dennis Gage and a feature of our car at the show!

Posted by Unknown at 6:24 AM No comments: